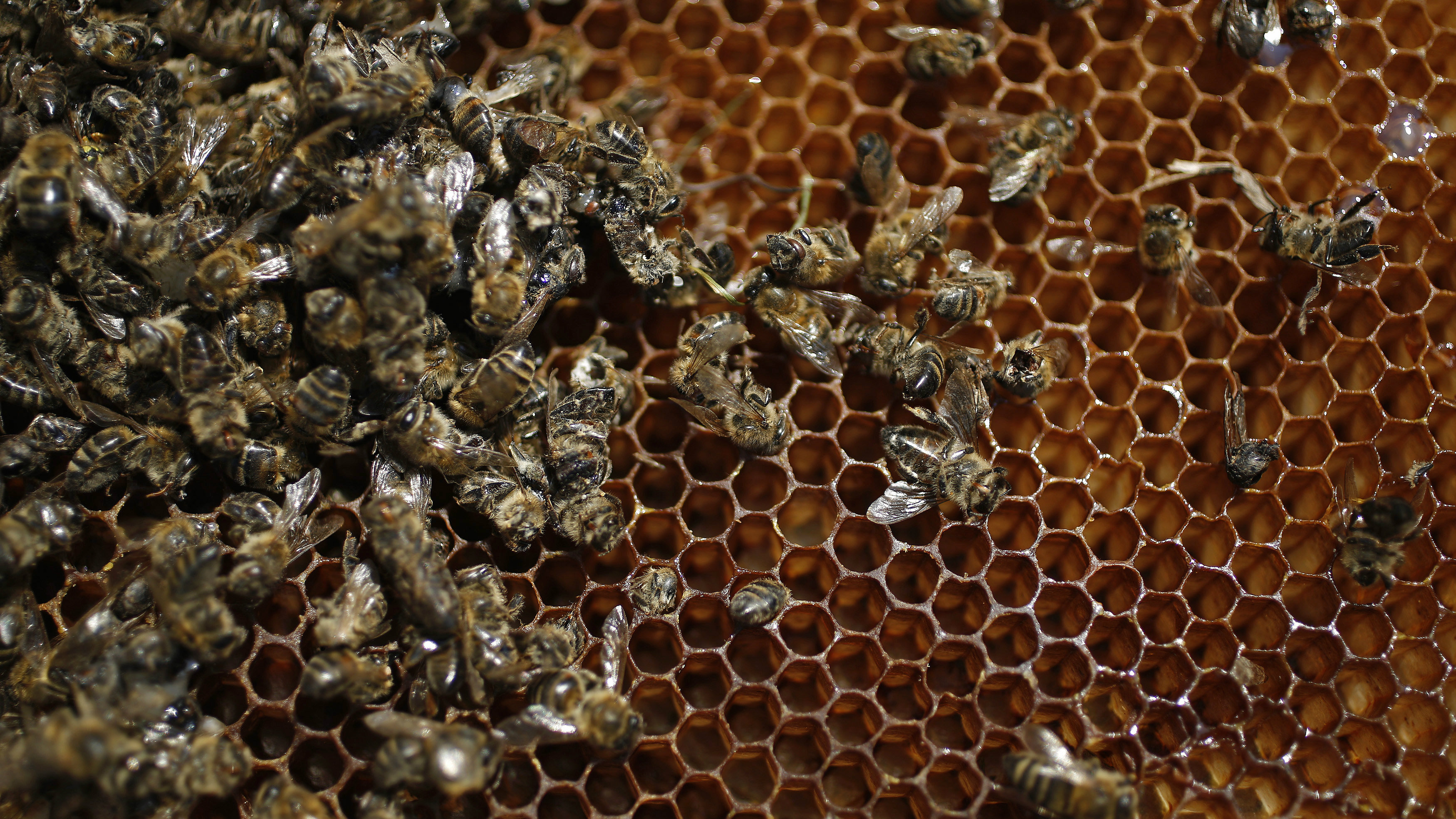 You might make up nuclei during the late Spring and Summer and sell them or move them to an out yard for final development. That will keep you colony count within the spirit of the guidelines. If you have an apiary location in the country, your primary limiting factor will be the amount of forage for the bees throughout the season. Some locations may be very good for Spring buildup and an early nectar flow, but then become a food desert that causes the bees to consume their stored food as well as steal food from each other.

Other locations may have productive nectar production for a few weeks every year, and then become and area where it is relatively difficult to keep bees. In a heavily forested region of New England I have seen apiaries with as few as four hives — any more than that will not increase total honey production. In areas of diverse forage and generally good beekeeping locations, I find that yards between 12 to 30 colonies are possible.


As you expand into a new yard location, start with a smaller number of colonies and, over time, build the holdings as experience shows that the site can support more bee colonies. There are sweet clover locations in the Midwest that can handle 30 or more colonies quite well but only during the clover flow.

Locations may be very good for Summer nectar collection but not at all suitable for wintering. You want to avoid locations with extreme wind exposure, risk of vandalism from hunters and snow machine users, or are nearly impossible to visit and feed during January and February. You will want to visit the colonies during the Winter to evaluate their weight for remaining honey and feed as necessary. If you have deep snow you may end up using snowshoes and a sled filled with winter sugar patties to put on the bees to prevent starvation.

Some clever beekeepers put a group of bee colonies on a trailer that they can move to pollination sites and honey production areas. At the end of the season the bees are returned to a permanent apiary where the colonies are placed on the ground, fed, protected for Winter, and watched carefully. Well protected beekeeper working applying smoke in an apiary.

Honey bees do not visit every flower species Nature produces. They rarely visit tomato and related flowers because they do not buzz pollinate the flower like bumble bees to obtain pollen. It confuses new beekeepers to see vast expanses of flowers in full bloom and not find a single honey bee visiting them. Sometimes the flowers are covered with pollinating fly species, and other times there may be a predominant species of native bee on the flowers. There are an estimated 20, species of bees in the world, and the honey bee is only one of them.

Different races of honey bees that have evolved to pollinate plant species found within their native habitat. For example, studies in Europe showed that Italian bees Apis mellifera ligustica were more attracted to citrus flowers than bees that had no selective time together with Citrus.

An unlikely feud between beekeepers and Mennonites simmers in Mexico

Similar differences in daily flight time were found between different races of bees in the African desert. It if sounds confusing, it is, and there are many specialists who have spent their entire careers trying to unravel this complicated puzzle. There is much more to learn about bees and flowers, a field called Bee Botany.

In the United States, these races have been interbred to such an extent that it is hard to discriminate traits. For the sustainable beekeeper, knowledge of the plant species and even varieties or cultivars of certain plants will be extremely valuable. Since the honey bee is not native to the Americas, it has a competitive relationship with other pollinators.

Generally, this competition makes both the honey bee and other bee species work harder to collect pollen and nectar, which is beneficial to the plant needing bee visits for pollination.

Many agricultural and garden flowers are also introduced to the Americas. Some, like apples are widely embraced by human culture while others, like spotted knapweed Centaurea spp and purple loosestrife Lythrum salicaria , are highly regulated in some areas and subjected to biological control agents introduced for their control. Since honey bees are generalists — visiting a wide range of species — they benefit this floral smorgasbord as pollinators while benefiting themselves while filling their hives with surplus honey and pollen. In a future article we will discuss the pollen and nectar producing plants important to bees and beekeeping, and the general colony management plans for the area.

We know that not all pollen sources are the same, and here is a simple summary:. It is beneficial to honey bee colonies to be situated near a major nectar source because it costs the hive less energy, in terms of honey, to launch tens of thousands of worker bees to a nearby location than a distant location.

Living with Ess: Starting a business in bee farming

The Beekeeper Next Door

In the U. Reports of bees flying ten or 15 miles to forage may be an exaggeration or a reflection of a complete lack of food of any energy composition. As you evaluate a potential apiary location, use an Internet map image or a traditional printed township map to draw circles around potential apiary sites. What is lurking in that title? Five eyes, and five openings to the heart.

Urban life seemed so full of noise and impenetrable surfaces; I had the feeling of never quite getting to the heart of things. As I learned more about the inner workings of the colony, an almost alchemical shift seemed to take place. The book describes how you became a beekeeper, and reflects on what that means. These include observation, care, nurture, interception, seizure, absorption, maintenance, preservation, retention, restraint. Yes, my notion of what it means to keep changed a lot that year. I came to understand it in a more open-handed way, as being about paying attention to another creature, being present to its needs, making space for it to thrive.

As a template for a good relationship, I think this extends well beyond our dealings with the hive. What does he have to say about honeybees? Pliny covers a lot of ground! The Natural History was written in the first century AD and is a bit like going on a fantastical adventure trail through the natural world. Many Classical thinkers wrote about honeybees, and I especially love reading their descriptions for the role that their imaginations played. With Pliny, you can almost feel him filling the gaps in his knowledge with flights of fancy as he writes that honey falls to earth from a great height, picking up a great deal of dirt on the way down, sliding over foliage and becoming tainted by the juice of flowers—thereby explaining its different colours, scents and consistencies.

Sometimes this guesswork proved surprisingly accurate. Aristotle wrote that honeybees are deaf—and so it was found, some thousands of years later, they lack an auditory system. In her book Bee, Claire Preston describes a common folklore belief that bees were terrified of thunder and lightning—and in fact they can sense when a storm is coming. So perhaps imagination can help lead us into new truths sometimes.

A little fantasy has its place. Eva Crane was born in , and trained initially as a mathematician. She turned to bees when a friend gave her a beehive to supplement the sugar rations during World War Two. She went on to write many books on bees and beekeeping, including this encyclopaedic tome, which I spent hours poring over in the reading rooms at the British Library.

lighspinesizglen.tk I was especially struck by how beekeepers throughout history have felt compelled to look in on the interior life of the colony. In the Reverend William Mewe constructed an octagonal hive with different levels, each one fitted with a small window sealed by a hinged shutter; in the diarist John Evelyn described a transparent apiary belonging to Dr Wilkins of Oxford, complete with dials, little statues, and vanes.

With developments in glass manufacturing, what we now call the Observation Hive arrived: a single comb bordered on each side by glass panes, and a whole colony on display to the viewing public. It was a popular exhibit. For a society on the cusp of industrialisation, the bees were intended to demonstrate willing and productive labour, all working for the common good.

Richard Mabey, one of my heroes, describes this book as richly informative, and beautifully written, and I think he has it just about right. It might seem quite a strange way of doing research, but for me that action of swimming out and coming back seemed to work quite well. I thought this book was brilliant, and as in-depth a study of honeybee biology and colony processes as any I came across. Get the weekly Five Books newsletter.

By describing the colony as an integrated and independent being Tautz experiments with the notion that we should understand it as having the same impulses, intelligences and rhythms as a mammal. In flight, they see in black and white; their colour vision only returns as they approach a landing spot.

This gets even more extraordinary when Tautz begins experimenting with different landing spots. Reading the book, one gathers a sense of how all these highly sensitive interactions between bees and their environments are contributing to that emergent group intelligence Tautz talks about, and at times it really does begin to seem quite eerie. Reading this book, I found myself returning to that thought of the in-betweenness of honeybees. A colony is individual and collective—a mass of separate beings and a superorganism.

Honeybees both fill and exceed our categories, again and again and again. The book was gifted to me as part of a collection of beekeeping manuals belonging to the mother of a woman I met last year. A friend of mine has recently begun trying to decipher them. The fascinating thing is how it considers the apiary— that is, a group of hives—as a whole.

Most modern hive-records look at a single hive, with separate notebooks for each hive. This way of recording takes a more holistic view. It expects there to be interaction between the hives. When I started beekeeping, I was advised to start a notebook. Those notes became so important, and I imagine I learned just as much from this practice of looking and recording as I did from sitting and reading. Well, perhaps not as much. Five Books aims to keep its book recommendations and interviews up to date.

If you are the interviewee and would like to update your choice of books or even just what you say about them please email us at editor fivebooks.